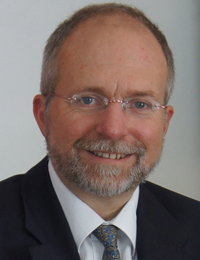 Languages: English, French, German
Jeremy Nicholls completed his postgraduate education in Manchester, United Kingdom, with a thesis on the design of a data capture programmable gate array for a scanning electron microscope. He began his career at Texas Instruments, where he led a team developing software tools for integrated circuit design. He also worked with Ericsson Telecom in Sweden on the design of ASIC microprocessor chips for their mobile phone networks.

As an examiner at the European Patent Office, Jeremy specialised in computer-related fields of software, image processing and neural networks. He has also contributed to the development of the EPO’s search software, and trained examiners in advanced search techniques using the EPO's online tools. He also carried out search training for examiners and representatives in Eastern European countries which had recently joined the European Patent Organisation.